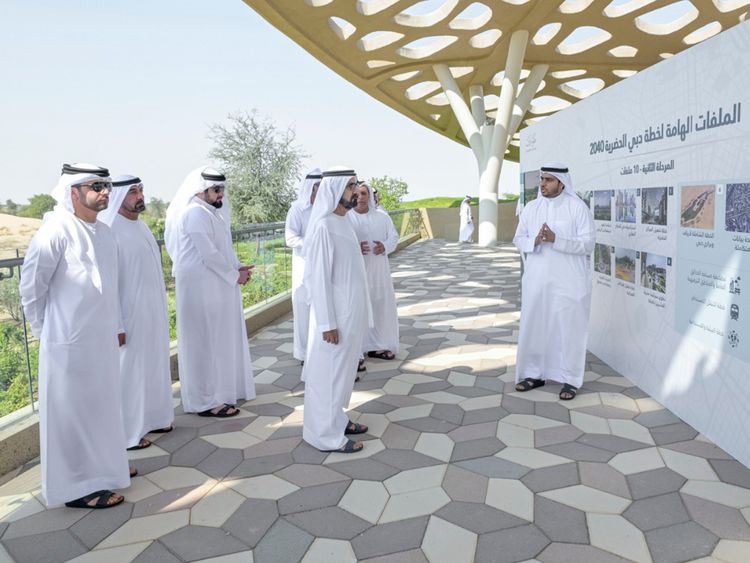 His Highness Sheikh Mohammed bin Rashid Al Maktoum, Vice President and Prime Minister of the UAE and Ruler of Dubai, during the launch of the new phase

Dubai; His Highness Sheikh Mohammed bin Rashid Al Maktoum, Vice President and Prime Minister of the UAE and Ruler of Dubai, has approved the second phase of the Dubai 2040 Urban Master Plan.

Sheikh Mohammed bin Rashid said: “Today, we have a clear vision for the development of Dubai’s urban infrastructure and housing sector until 2040. Our goal is for Dubai to be an eco- and pedestrian-friendly city, and a city with a high yield from urban agriculture.”

The plan also prescribes a comprehensive strategy for Dubai’s real estate sector up to 2040 to align it with the requirements of the Master Plan and strike a balance between supply and demand. It calls for proactive initiatives to manage opportunities and changes in the real estate market, achieve sustainable urban development, and boost investor confidence.

The second phase of the Dubai 2040 Urban Master Plan includes a framework for high-yield agriculture and farming by identifying suitable locations and developing the infrastructure and facilities required to ensure food security. Phase II also outlines plans for preserving urban heritage to enhance the emirate’s identity, promote historical areas, landmarks and buildings, and improve the tourism experience at archaeological sites.

The master plan also calls for developing a 20-minute city where residents can reach their destinations within a 20-minute time frame on foot or by bicycle. The project involves developing integrated service centers with all the necessary facilities and increasing the population density around mass transit stations, allowing residents access to 80% of their daily needs and destinations within 20 minutes.

Additionally, a plan will be developed to enhance and utilize urban spaces, such as alleyways, spaces underneath bridges, and squares, by augmenting the elements of well-being to make them attractive and relaxing for residents and visitors. The initiative contributes to enriching the beauty of urban areas, developing green corridors, reducing the carbon footprint, and enhancing the landscaping strategy. A comprehensive plan for pedestrians and soft mobility across Dubai will focus on connected pathways in high-density areas.

Phase II of the master plan involves developing an avenue for all residential neighborhoods. It entails defining an area within the residential neighborhoods and developing it under the principle of integrated street network where facilities and services are focused on catering to the residents’ needs. This initiative enhances well-being, supports soft mobility and reduces travel time within Dubai.

His Highness Sheikh Mohammed bin Rashid Al Maktoum was also briefed by Al Tayer about the 17 projects that have been completed or are nearing completion. With the support and follow-up of Dubai’s leadership, the Supreme Committee of Urban Planning in Dubai completed six projects, including Dubai’s National Housing Policy. As part of the policy, a historic housing budget of AED65 billion was allocated for housing citizens in Dubai, doubling the number of beneficiaries of Dubai’s housing programme. The area of the land plots allocated for housing nationals in Dubai also doubled, reaching 1.7 million square feet.

Among the completed projects was the launch of the Hatta Development Master Plan to enhance well-being. The plan aims to offer investment opportunities to local residents, support local tourism, attract investments, strengthen partnerships with the private sector, preserve heritage and nature, and promote tourism in Hatta.

The completed initiatives also included drafting the Urban Planning Law and developing an integrated planning database to support sustainable development in line with the emirate’s plans. The initiatives also included the Dubai Countryside and Rural Areas Development Master Plan, which intends to preserve the nature of those areas and serve the needs of residents and visitors. The plan aims to enhance the well-being of residents and visitors besides providing a unique tourist experience and developing Dubai’s countryside as one of its main tourist attractions.

The Supreme Committee of Urban Planning aims to conclude another five projects by the end of this year, including a project to increase the size of Dubai’s public beaches and develop a draft of the Dubai Wellbeing Strategy.

The projects that will be completed next year include preparing a plan for integrating land uses and transport policies, landscaping policy, directing development in coastal areas and increasing the length of beaches, doubling the public parks and recreational areas, developing a sustainable mobility plan, and environment and sustainability plan.

The Best City for Living

Accordingly, the city’s urban infrastructure is set to be further modernized, with the development focused on five major urban centers. The existing urban centers include Deira and Bur Dubai, historical areas that include museums, traditional and popular markets, and historical residential areas that highlight the emirate’s tradition and heritage. The economic and trade center of the city comprises the Dubai International Financial Centre, Sheikh Zayed Road, Business Bay, and Downtown, and serves various business and financial activities. The tourism and entertainment hub includes Dubai Marina and Jumeirah Lakes Towers and serves various economic and tourism activities.

The two new centers include Expo 2020 Centre, an economic and growth hotspot featuring affordable housing and a focal point for the exhibitions, tourism and logistics sectors; and Dubai Silicon Oasis Centre, a science and technology and knowledge hub that drives innovation, digital economy development and talent generation.

The new Master Plan defines an integrated approach to the development of the urban centers by providing equitable access to facilities, services and opportunities across the city for all residents. The plan identifies six urbanization levels that follow a graded structure of urban centers of mixed uses and densities that perform specific residential and functional roles for the community within the scope of their services.

Based on these six levels, it would be possible to determine infrastructure requirements — roads and transportation systems, energy and government services such as hospitals, schools, service centers, and service and recreational facilities — in a way that provides integrated services across all Dubai districts while enhancing the use of flexible and sustainable means of mobility.