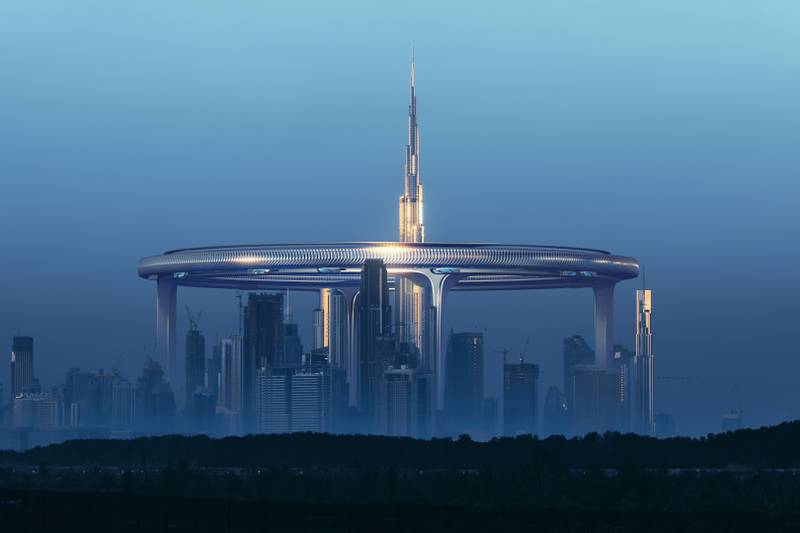 Downtown Circle would be a megastructure encompassing Downtown Dubai

The planned project is known as Downtown Circle and is a 550-metre-tall ring, which will encircle Burj Khalifa. Designers hope it will shake up traditional ideas of gated communities and skyscraper homes. It is also intended to be sustainable and self-sufficient.

Artist illustrations show the striking scale of the structure, which is hoped will encompass all of Downtown Dubai with a circumference of three kilometres.

It will be broken down into smaller units, which will contain homes as well as public, commercial and cultural spaces.

The ambitious project has been drawn up by Najmus Chowdry and Nils Remess, co-founders of Znera Space, who often focus on experimental architecture that explores and addresses social boundaries and environmental issues.

Giant ring surrounds Burj Khalifa  – Downtown Circle was created by the pair during the pandemic, which sparked the idea of rethinking how we live in cities, particularly in skyscrapers.

“We wanted to go down to the basics of how gated communities were established as a very horizontal built environment,” Chowdry tells The National. “But you can’t have that here because of the dense urban fabric of Dubai. The best way to explore and practise this concept was in Downtown itself.”

“The concept was of a vertical city,” adds Remess. “When Covid-19 hit hard, we thought a lot about suitability and how can we change things, and how we can create better urban planning. We looked at aspects such as garbage disposal, food production, traffic problems, pollution. We put all these things together and came up with the concept.”

Giant ring surrounds Burj Khalifa  – Downtown Circle is made up of five levels and would sit on five points, or pillars, embedded into the ground. The massive span of the circle itself would be composed of two main rings held together by a continuous green belt named the Skypark which vertically connects the floors with each other creating a connected three-dimensional urban green eco-system.

“One of our targets was agriculture,” Remess says. “Usually cities begin with agriculture and then continue with urbanization. Today, many big cities are faced with the problem of how they can add more agriculture. This is one of the aspects we wanted to add into this concept — a self-sufficient city.”

Acting as a lung to the structure, Skypark would also include swamps, waterfalls, tropical vegetation and various floras. The plan would also be to have areas for rainwater harvesting, solar power and a system storing carbon and filtering pollutants from the air as part of the urban ecosystem.

An idea for a tram on the outer perimeter ring is also included in the concept and drawings, which were created in collaboration with Poland-based visualisations studio Pictown. Twenty spacious pods travelling up to 100 kilometres per hour would transport passengers around the Downtown Circle while offering 360-degree views of the city.

The idea of a self-sustainable city within a city is similar to The Line megaproject in Neom, Saudi Arabia. However, Znera Space’s concept differs as it is integrated into the fabric of an existing city unlike The Line, which is planned to be built in the desert where space is abundant.

While Chowdry and Remess have considered all aspects of urban living, from the social, economical and sustainable while creating Downtown Circle, the discussion about what is possible in architecture excites them equally as much.

“Our roles as architects is to come up with these ideas,” Chowdry says. “We want people to comment on it, criticise it, to see how we can think about building topographies.”

“It also raises the discussion of what we can do better,” adds Remess. “The way we build cities, the way we plan things. There can be negativity around this type of discussion but also solutions in how we can change things for the better.”